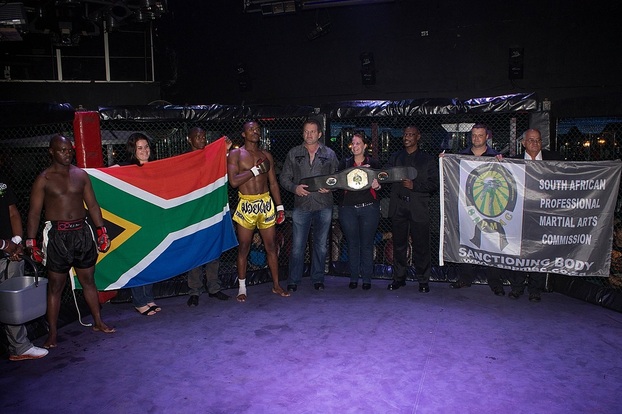 Main Fight – WKF / SAPMAC South African Middleweight Extreme Striking
Title
The stunning Presleys Nightclub in Johannesbuurg was the setting for the first ever Extreme Striking title fight anywhere in the  world.
It featured WKF world number five and South African K-1Champion - Sydney “Machine Gun”Mokgolo who at 21 years old came into the fight as the probable favourite due to his frightening 18 wins from 18 fights with 17 kos.

His opponent was the vastly experienced Soweto fighter Lucky "Mr Sidekick” Notshele who is an ex South African K-1 and Kickboxing champion with international experience and over 57 pro fights to his name so it was expected to be a tough task for the youngster.

After the opening ceremonies and national anthem the battle started with Mokgolo immediately attacking Notshele and causing huge problems with his speed, power and
combinations.

Notshele was backed onto the cage fencing  with a superb double front kick and the youngster piled on the pressure with body and  head punch combinations plus some knees before launching into a multiple elbow attack of frightening proportions ending with a truly massive elbow to the side of Notshele’s head which everyone knew was the end of things just from the sound of the impact alone.

Long before the referee declared the result Mokgolo was on top of the cage arms raised as he also knew there was no chance of Lucky getting up.

A stunned crowd cheered loudly  for the immensely popular young fighter a young guy of truly awesome potential who literally assassinated his much more experienced opponent.

The crowd and promoters obviously expected a much longer fight but this display of pure brutal power and ability left no body disappointed whasoever, just slightly awestruck that such a young guy can already be so clinically destructive.

If you love all action fighting from a fantastically built fighter with every skill in the book with a knockout record second to none – this is your boy  !!!!!!!!!!!!!!!!!!!!!