Welcome to the world of WKF Extreme Striking a brand new international fighing discipline guarranteed to provide the ultimate in fighting action as the skills of all the great stand up arts are brought together in a competition using 8 oz MMA style gloves that fit our great fights into either the ring or a cage efforlessly. Where Extreme Striking is on an MMA Cage Fight bill you don't need to ask what the best fight of the day will be - you got it, The Extreme Strking fight in over 85% of the shows that have included it.
Its all action its all striking skills and its HERE.
Check out the menu bar on the left for individual items of news, events, rules, information, equipment or great pics AND very soon great vidio action. 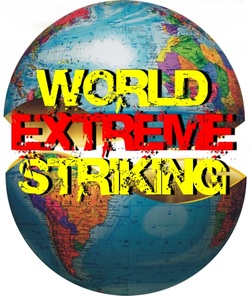 Extreme Striking has been a front line
professional sport in South Africa since 2004 and it was invented largely to combat the huge growth of MMA which was threatening our stand up fighting arts  and most of all to keep our stand up fighters active by getting stand up fights  on the big MMA fight bills as the promoters were happy with the MMA style of  fighting glove as against the bulky looking boxing gloves generally  used.

A special 8oz MMA style glove was constructed and
approved by the national control board for the new fighting
discipline.
A brand new design has been tested and launched
in September 2012 and photos of the new glove are shown
below.


To date no serious injury has ever occurred from Extreme Striking and the fighting style has grown in popularity drastically in the past 12 months as MMA fans become tired of boring ground fighting and revel in the all action stand up fights supporting the  MMA.

Another reason could be the general excellence of the stand up fighters who have a proper grounding through amateur kickboxing and Muay Thai with good physical preparation and long learned technical skills instead of the Johnny come lately MMA guys who on so many occasions appear in pro events with no proper amateur martial arts background at
all.

Recently I heard the Extreme Striking referred to as “proper fighting” and MMA as “Playground Fighting”.
I think that probably sums it up quite  well. 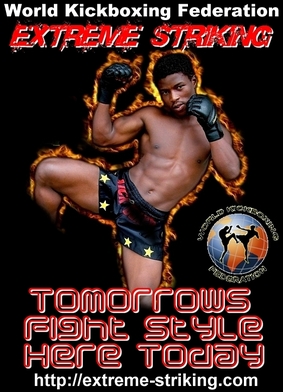 The simplest description of Extreme Striking
would be full Muay Thai rules with larger 8oz MMA style gloves instead of boxing gloves.

Fighters are allowed to use all proper boxing
punches including the spinning backhand, elbows, knees and kicks to all parts of
the body and head.

Clinching for a short time is allowed and the
clean throwing of an opponent is a major points scoring
opportunity.
The rounds are reduced to 2 minute rounds out of
respect to the intensity of the action.

Scoring occurs ONLY when an opponent is cleanly
punched, kneed or kicked to the ground.
A score of one point is given for each clean
knockdown irrespective of the
technique.

While the downed fighter is getting up the referee will clearly announce a point to each judge and the crowd by holding the successful fighters arm and indicating one point much in the way a rule breaking
fighter would be shown to have a point deducted.

The same one point award is also given when a competitor cleanly throws his opponent to the ground while he remains standing.

The judges scoring is based on these knockdown scores firstly but he also scores the 10 point MUST system which only comes into play if the two fighters are level on the scoring points at the end of the
fight. ( a judges score card is attached under the scorecard menu) 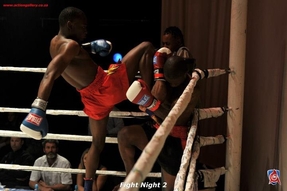 Extreme Striking was initially legitimized and
introduced by the Professional Kickboxing Council in South Africa back in 2005 and the newly confirmed government appointed body SAPMAC (South African
Professional Martial Arts Commission) is fully behind the continued development of this exciting young sport.


From October 2012 this new and exciting sport has  been adopted by the World Kickboxing Federation for release and sanctioning worldwide.
WKF African continental director Mark Hey will assume the role of President for Extreme Striking worldwide as continental and national structures are put in place.

Any enquiries can be sent to  extremestriking@gmail.com 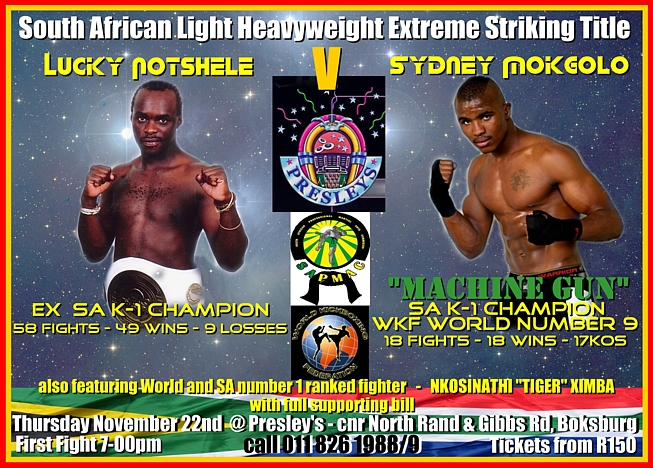 It could be said that Extreme Striking is the ultimate fighting style as it takes all the great action aspects of the world’s
greatest fighting arts and brings them all together in one intense format.

The biggest problem with MMA is the apathy of most viewers to the ground fighting which is not well understood by the vast majority who still remain amazed as a fighter leaps in the air to celebrate a submission victory that they never even
saw.

The times spent on the floor by the MMA fighters usually generate audience calls of“stand it up” and that is exactly what the Extreme Striking Championship is going to  do.

It is our belief and that of many in MMA and professional boxing that Extreme Striking will become a major world force in the coming years and we as South Africans will be very proud to have been involved from the start.

WKF world office has adopted and sanctioned this style of fighting worldwide with already a great interest from national directors on launching the sport in their  respective countries leading to world level events from 2013 as other countries
get excited about the ultimate  professional fighting art.